Items moving at velocities comparable to the speed of light will look very different for the split second before they leave Earth forever. Upload any image to see how it would change if it were moving at astronomical speeds and dive into the world of relativism and color.

Image at 0% the speed of light*

Wow, it’s TOO BIG. I made the picture smaller. I want it big!

Above you can experiment with the premise of the title. It can help you get a feeling for what are the velocities involved at which colors start to change. You might even be able to answer the question but read on if you want to understand that answer as well.

What even is color?

Questioning color is something you’d expect to do after injecting too many marijuanas and not while reading this respectable source of science truths. However it’s imperative that we understand the basics before we go on.

Visible light represent a small section of all electromagnetic spectrum at the 380nm - 700nm wavelength range. Its immediate neighbors are ultraviolet (UV: 10nm - 400nm) and infrared (IR: 700nm - 1mm) light. Other members on the spectrum are:

Colors in the visible spectrum at different wavelengths. The shortest wavelengths we can see are violets around 400nm all the way to the red at 700nm.

At this point I want to reiterate the question in the title of this post. A red traffic light is shining light at around 650nm. Why would it ever appear green if there is no light present with wavelengths between 500nm and 550nm?

Chances are you already heard of the regular Doppler effect and how it affects sound. It’s why an ambulance siren sounds different depending if the ambulance is driving towards us or away from us. That can be especially noticeable when it drives past us.

Note: Don’t hurt yourself and call an ambulance to test this. The effect is not present if you’re inside the car so you should hurt other people close by instead.


Sound of an ambulance siren passing by. Source.

Color shifting your selfies above was clearly a pointless waste of time. You’ll never be able to show that Papa Smurf impersonation at 30% the speed of light.

However, there’s more to outer space than the objects we’ve made and we have measuring instruments more precise than a naked human eyes. The fastest star in our galaxy is moving with 1755 km/s (0.5% speed of light) and hand-held police radars can measure the Doppler effect on moving cars using light with wavelengths in centimeter range.

When the source of light is moving, the wavelength it produces gets either shortened of lengthened by the distance the source travels during that time. Below is an illustration of that concept.

The exact formula for how much the transmitted wavelength, marked as $\lambda$, changes is

You did it! You scrolled all the way to the bottom of this page.

We’ve gathered both pieces of the puzzle needed to solve the title question. Using the formula from the previous section and the wavelength-color link from the first section we can construct the below graph. 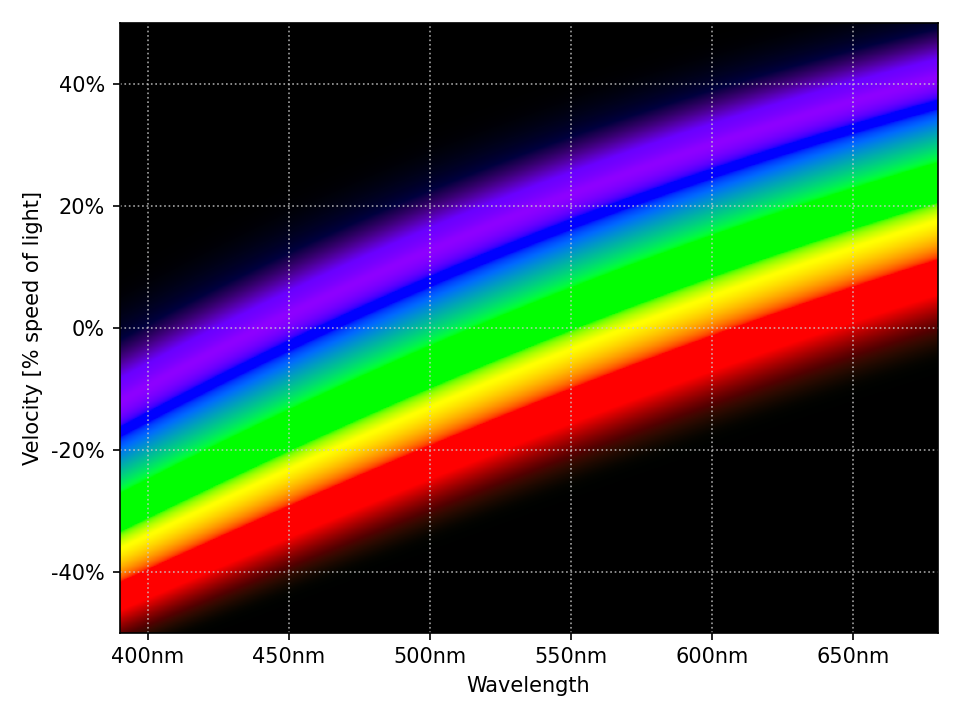 Lets explain the graph a bit. The horizontal line at 0% velocity is the same as the graph from the first section. It just shows how we see colors in everyday life. The line at 20% velocity tells us how we would see the world moving at 20% the speed of light - the visible spectra would shift as we would no longer be able to see wavelengths between 400nm and 500nm.

Now lets take a look at the vertical line at 650nm. Stationary that color is red. Like the red in a traffic light for example. But when its source is moving at 20% the speed of light towards us we will perceive it as green.

Part 2 on this topic which will dive further into color science will be coming out soon. Make sure to subscribe via RSS or via email to be notified when it gets released.